A History of Schroeder Hall 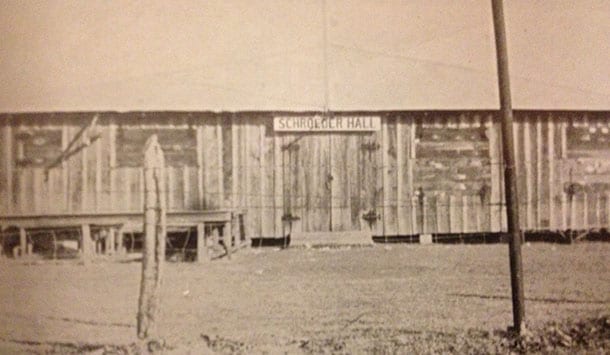 Just shy of 20 miles west of Victoria, Texas lays the town of Schroeder, home to the second oldest dance hall in our Lone Star State. German immigrants began moving to the area in the 1840s and slowly built up the community with its own general store, school, blacksmith shop, cotton gin and gristmill; the settlement, then known as Germantown, was only missing two necessities: a post office and dancehall. Both were completed in 1890, but since dancing was deeply ingrained in German culture and tradition, one can imagine which the residents were more excited about.

In 1918, with the advent of World War I and resulting in anti-German sentiments, Germantown was renamed “Schroeder” in honor of Paul Schroeder, the first townsman killed in the war. After a fire destroyed most of the business district in 1925, the old dance hall was torn down and replaced by a more modern building, known to this day as Schroeder Hall. The first dance in the new space was held on July 16, 1935. The rectangular building was outfitted with a bungalow tin roof, an open-air soda stand out front, and a beer house off to one side (as at the time, many dance halls didn’t allow beer inside). In its earliest days, lanterns lit the hall and wooden benches provided seating all around the dance floor. The “bullpen” was at the rear of the hall; fenced off by chicken wire, this was an area where spectators could watch for free, paying only if they cared to dance. 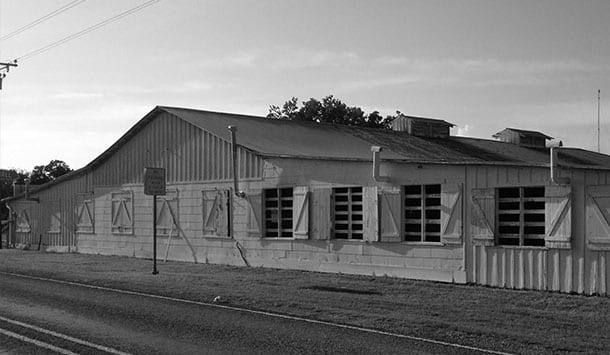 Up until 1950, the hall had seen two owners, Ed Scherlen and then F.F. Post. After Helen and Byron Hoff bought the property from Post, they installed modern air conditioning in the 1960s. Three-phase electricity was still unavailable to the area at the time, so the Hoffs drove the A/C by a diesel generator– the one that still powers the building today. Many of the era’s largest touring acts played Schroeder Hall, beginning its status as the area’s center of entertainment. 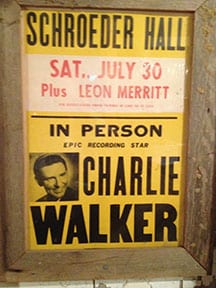 The hall has seen such legendary artists as Ray Price, Mel Tillis, Tammy Wynette, George Jones,Hank Thompson, Jimmy Heap, Ernest Tubb, Merle Haggard, Willie Nelson, Glenn Miller Orchestra, Tommy Dorsey Orchestra, Kevin Fowler, Randy Rogers,Eli Young, Robert Earl Keen…the list goes on. Imagine the generations of Crossroads area residents who grew up sleeping on the hall floor, while their parents danced away the night. From June 2000 until they sold the hall just this year, new owners Jack and Sharon Kleinecke continued building Schroeder Hall’s reputation by bringing in the biggest names in country music. Its most recent buyers plan to continue this tradition with an ever-expanding music lineup. The legend lives on for this hallowed hall and the culture of its unique surrounding area within our Lone Star State.