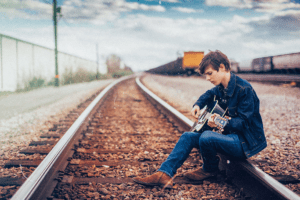 My full name is William Beckmann Hyslop and I’m from Del Rio, Texas.

Who are you most excited to see at MusicFest 2020 and why?

Man, I’m pretty stoked to see Jonathan Tyler. I’ve never seen him play before but he’s got this one song that I love called ‘Everything Was Cool in 2002.’ I listen to that song all the time. Charley Crockett is another one. His voice is so different and unlike anything I’ve ever heard. I’m a big fan of both those guys.

If you could only listen to three songs for the rest of your life what would they be and why?

‘Hurts So Good’ by John Mellencamp would make the list for sure. That guitar riff is monumental. Every time it comes on, I can’t help but jam to it.

Another one I never get tired of listening to is Ray Price’s version of ‘For The Good Times.’ I’m telling you man, that recording is so perfect and makes me want to cry when I hear it. I don’t know if it’s the way Ray sings it or Kristofferson’s lyrics that choke me up. Probably both but either way it’ll forever be one of my favorite songs.

I think the last one would be this old mariachi song called ‘Directo al Corazón.’ It’s a song that Pepe Aguilar sings and I love it because he’s talking about this girl that left him for another guy with more money. The pain in his voice is what I love. It’s definitely my favorite song in Spanish.

Tell us about the craziest thing that has happened to you at a performance?

Not long ago I was in Arlington at an award show. I was playing one of my songs and when I finished, I walked off stage to the left wing and Randy Travis and his wife were right there. I kind of freaked out. I had no idea they were watching me from the side of the stage. Both Randy and Mary were so kind to me. I’ll never forget that night.

If you could go back in time and watch any performance who would you see and why?

That’s a hard question. Let me think… Honestly, I’d probably want to go see The Rat Pack at one of their shows in Vegas. I’d definitely be taking notes on how to be funnier on stage (laughs). Those guys had it down; The jokes, the charisma, the voices. They were true entertainers.

Where do you draw most of your inspiration from when writing songs?

I don’t know. That’s what makes it cool I guess. The fact that inspiration comes in different ways every time is what keeps me on my toes.

What is your libation of choice before you take the stage?

Water and hot tea. Specifically throat coat. I also have these lozenges called Grether’s Pastilles that I carry with me literally everywhere I go.

If you could duet (dead or alive) with anyone who would it be and why?

Emmylou Harris. I think our voices would sound cool together.

Well, I remember having a natural attraction to music when I was younger. Nobody else in my family played music or sang but my parents encouraged it. They put me in piano lessons when I was in the 3rd grade and I did that for a few years. Then I kind of went on my own and taught myself how to play guitar and sing. I don’t know… It just kind of happened. Looking back, I don’t really think I got into music. I think music got into me and I just accepted it as being part of my life.