Breaking the Ice with BJ Barham 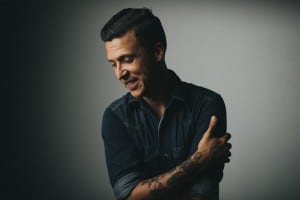 We caught up with BJ Barham of American Aquarium to get down to the nitty gritty. Check out his answers here!

My name is BJ Barham and I am the lead singer of the Raleigh, NC band American Aquarium.

What’s new with the you and/or the band?
I just put out my debut solo album, ROCKINGHAM on August 19th and am currently on tour around the South supporting it. American Aquarium is working on our next studio album and preparing to release our new live album, LIVE FROM ATLANTA, in November.

What are three things you can’t live without?
Coffee, my notebook, my running shoes

What is something you hate, but you wished you loved?
Horror movies. The rest of the band is really into scary movies and I just can’t get into them, partly because I’m way too jumpy in the theater.

What did you dream about last night?
I can never remember my dreams. I’m sure it probably had something to do with food or me falling to my death.

How’s life?
Life is good. The band is doing well. I just bought a house with my wife. Released a solo record. Celebrating two years of sobriety. You won’t hear me complain anytime soon.

What artists influenced you growing up?
Bruce Springsteen is one of the biggest influences on my songwriting. Dylan, Cash, Waylon, Willie. Hank Sr. Those were all playing in heavy rotation in my house growing up. I was lucky to have parents that raised me on proper songwriters and not the nonsense they call “country” music these days.

Who are you most excited to see at MusicFest this year?
Always good seeing our guys in Turnpike Troubadours play the big tent. Jonathan Tyler and his band always put on a monster show as well. Excited to finally see Flatland Cavalry live, really digging that new record.

Favorite MusicFest memory?
My first year I did a song pull with Evan Felker (of Turnpike Troubadours) and Jonny Burke. It went on for hours and we just traded stories and songs. Always a fun time when I team up with those two.

What’s one song you never skip on your playlist?
John Fullbright’s “High Road”

What would you do if you had a working time machine?
Go back in time to see Gram Parsons play live. I lived off of those records in my twenties and always wish I’d have seen those songs live.

What is your favorite three-word sentence?
“We there yet?”

If they made a movie about your life, which actor would you want to play you?
Andy Samberg

Are you a morning person or a night person?
Night person for sure. Being in a band turns you into a vampire. The van never gets rolling before noon.

If you could ask another artist any question, what would it be?
The first thing I ever talk to other songwriters about is their songwriting process. We all have very different ways of getting to the same place and I’m always curious to hear how some of my favorites write songs.

Name one artist of any genre besides country that you are a fan of and tell us why?
That new Kendrick Lamar record is out of this world cool. I respect anyone that has something to say and has an original way of saying it. That record is super heavy. It’s catchy, but remains relevant. Musically it takes big risks but you can still move to it.

What makes you laugh out loud?
Me and the boys text message chain.

Fill in the blank: It’s not a party until…
I have left the room.

Advice you’d give first time MusicFest participants?
Don’t go too hard the first day. Ease into the partying. This is our fourth MusicFest and I still watch people over do it on the first day and never recover. It’s a marathon, not a sprint. Enjoy yourself responsibly.

You can purchase ROCKINGHAM now at https://itun.es/us/JzCfdb