Breaking the Ice with Bri Bagwell 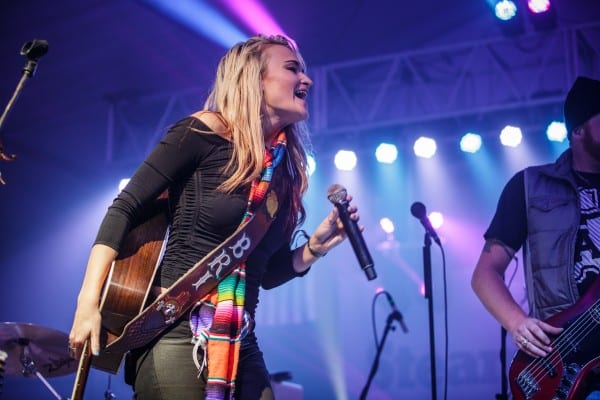 Bri Bagwell has been staying busy touring all over the world with her band, “The Banned.” She just won Texas Regional Radio’s Female Vocalist of the Year for the fourth year in a row, and she will be celebrating her sixth year at MusicFest with us this upcoming January. We sat down with her to talk about all of this and more!

Who are you and where are you from?
My name is Briana (Bri) Bagwell and I’m from Las Cruces, NM.  I’ve been in Texas 10 years, which makes me (un)officially an import.  I’m an intensely passionate singer-songwriter that tours with 5 boys in a white van and trailer anywhere they’ll pay us to play.  I am 29, have multi-colored hair, and I love long walks on the beach…?

What’s new with the you and/or the band?
We’ve been hitting the road so hard, and I think we will clear 150 shows this year.  Sometimes you blink, and 6 months have gone by and you feel like all you’ve done is play shows.  But the new single “Beer Pressure” is out, we are making a music video, I’m in the early stages of recording a new record, we got to go to 7 new states and Mexico AND France this year, so I guess it’s been a blur of a lot of new road miles.  Oh!  And we just got Texas Regional Radio Female Vocalist of the Year for the fourth year in a row!

What are three things you can’t live without?
Dry Shampoo, my synced Apple products, and the love of my family/friends.

What is something you hate, but you wished you loved and why?
I wish I just loved the heck out of cardio.  Just loved it so much I did it all the time… because, see question #13.

Most memorable MusicFest moment?
We played the big tent last year, and right before the show, my drummer Marshall Black brought a bottle of Clint Black edition Silver Oak wine and we all had a toast to that special moment.  The Banned realized how important the show was not just for them, but especially for me, and made the night a memorable one.

How’s life?
Life is fast-paced, crazy, beautiful, and fulfilling for me right now.  As I get older, I get more comfortable with the idea that I’m exactly where I need to be, instead of always obsessing over needing something more.  I still want more, but I am also completely content with my career and my place in this world at this moment, if that makes sense.

What artists influenced you growing up?
I had so many influences growing up.  My parents loved music from Johnny Cash (old country) to Fleetwood Mac (70’s rock) .  Then I found Shania Twain, The Dixie Chicks, and Vince Gil.  Then it was Vanessa Carlton and Three Doors Down, and then Miranda Lambert, Lori McKenna, Sean McConnell.  These are just a few, but I think it paints a picture of diversity with mainly country influences.

Who are you most excited to see at MusicFest this year?
Suzy.  Boggus.  I mean, what a catalog of hits and such a great voice.  I’m a huge fan.

If you created a slogan for life, what would it be?
Everybody should be nice, somebody is out there made just for you, anybody can be something, and nobody has it together.

Favorite song to sing along to while on the road?
We always sing/jam to Deryl Dodd – we call it “singing the hits.”  That’s How I got to Memphiiiiiiss!

What’s your spirit animal and why?
My spirit animal is an elephant – big and a little clumsy, but really soft at heart.  And I hold on to certain things forever…

What would you do if you had a working time machine?
I believe in Jesus, but I’d like to solve the dinosaur mystery.

What is your favorite three-word sentence?
Late night Whataburger?

If they made a movie about your life, which actress would you want to play you?
Kristen Wiig would play me in a movie, because even though I’m not as funny as her, I’d like to be.  And I would pay to see her in anything.

What is something you do before taking the stage?
I wish I could say that I have a “pre-show ritual”, but life is always so crazy on the road.  Sometimes I have time to do vocal warm ups and pray and have a band fist bump pep talk and sit and have a breather with a whiskey drink, and sometimes I’m changing in the van and putting mascara on using my phone camera as a mirror and carrying my boots while at a full fledged sprint to the stage… So there’s that.

If you could ask another artist any question, what would it be?
Hey Miranda Lambert, wanna take me on tour?  😉

Name one artist of any genre besides country that you are a fan of and tell us why?
I’m a huge Patty Griffin fan because she writes and sings so freely.  Someone gave me the “1000 Kisses” album when I was in college and I was never the same songwriter after that one.  It expanded my views of songwriting limitations, and I think it was recorded in a basement?  Geez.

What makes you laugh out loud?
My band (The Banned) is so dang funny.  I sometimes scare them with my random loud cackle coming from my backseat cave in the van when they think I’m sleeping.

Fill in the blank: It’s not a party until…
Nah.  It’s always a party.

What part of MusicFest are you most looking forward to?
I know everyone says this, but seeing all of my music buddies in one place is just a blast.  It’s like a bearded, drunk, talented family reunion.