Breaking the Ice with Cleto Cordero of Flatland Cavalry 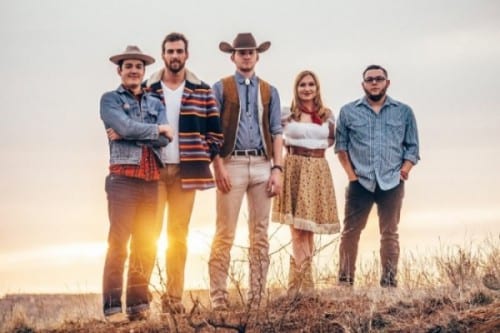 We had the chance to catch up with Cleto Cordero of Flatland Cavalry. The West Texas band (made up of Cleto Cordero, Jason Albers, Jonathan Saenz, Laura Jane, and Reid Dillion) recently released their new album, Humble Folks, and have been taking the Texas music scene by a storm. You can catch them at their MusicFest debut this upcoming January!

Who are you and where are you from?
My name is Cleto Cordero (of Flatland Cavalry). I was born and raised in Midland, TX.

What’s new with the you and/or the band?
We just released our debut full length album, Humble Folks, in April 2016 and have been out on the road promoting it!

What are three things you can’t live without?
My life wouldn’t be worth living without: my faith in Him, the love and support of my family and last but not least, music – creating it, enjoying it, and sharing it!

What is something you hate, but you wished you loved and why?
Public speaking. I wish I was more eloquent. Give me a sheet of paper, pen and a guitar and I will do my best to hit you in the feels. Take away the previous: word vomit.

What did you dream about last night?
Kaitlin Butts… (insert brownie points here)

How’s life?
We’re touring in the new van and are getting to perform for bigger crowds and open for some of our heroes AKA “Livin’ the dream”. Life is great!

What artists influenced you growing up?
John Mayer had a huge influence in my desire to want to create music that anyone could listen to. After I discovered Texas Music in high school, I was hooked on Randy Rogers, Wade Bowen, Jason Boland and Turnpike. Those guys definitely lit the fire in my heart to try and pursue songwriting and music.

Who are you most excited to see at MusicFest this year?
It’s a three way tie between Turnpike Troubadours, Shane Smith & The Saints and American Aquarium. They are all such amazing musicians. Inspirational.

If you created a slogan for life, what would it be?
#followyourdreamskids

Favorite song to sing along to while on the road?
We are constantly jamming “Running Down a Dream” by Tom Petty.

What’s your favorite candy bar?
I am not a big fan of sweets but if I had to choose, it’d probably be a Hershey’s Symphony bar.

What would you do if you had a working time machine?
I would pay a visit to my ancestors. Like 500 years back. I think that would be pretty cool.

What is your favorite three-word sentence?
“I love you.”

If they made a movie about your life, which actor would you want to play you?
Probably Michael Cera (the kid from Super Bad). He seems both equally awkward and youthful.

Are you a morning person or a night person?
I am a night owl. Being up before 10am is considered “bright and early” in my book.

If you could ask another artist any question, what would it be?
When was the exact moment you knew you wanted to pursue music?

Name one artist of any genre besides country that you are a fan of and tell us why?
Nickelback… JUST KIDDING. John Mayer. I love how his music can transcend genres and is always so easy to listen to.

What makes you laugh out loud?
Here lately it has been the plethora of stupid videos on Facebook. Some people aren’t too bright, but at least they’re entertaining. Try searching “Downhill Barbie Jeep Racing”.

Fill in the blank: It’s not a party until…
…the work gets done first. Celebrating isn’t much fun if you haven’t anything to celebrate about. As a young band, there is no better way to celebrate all the hard work we’ve put in throughout the last couple years *and* kick off the new year, than by playing at Musicfest 2017.