Breaking the Ice with Jason Eady 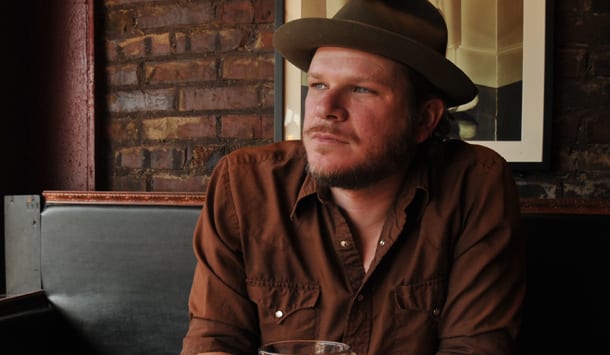 Q: Who are you and where are you from?
A: My name is Jason Eady and I’m from Mississippi originally. I moved to Texas in 2002 and have lived here ever since.

Q: You released a self-titled album earlier this year. Where did your inspiration come from for this album?
A: This album was about stripping the arrangements down and getting back to the basics of the songs. With the exception of steel guitar, everything on the album is acoustic. We wanted to make a songwriter record with an unplugged acoustic full band arrangement.

Q: What’s it like having the opportunity to play music with your wife?
A: It’s incredible; to be able to share that experience that directly with someone is a very special thing. We both come from similar backgrounds musically but also very different at the same time. So we connect musically, but still learn from each other. When you play music, it’s such a big part of your life. I love that we get to share that with each other.

Q: Since both you and your wife are musicians, is it hard to find time to spend with just each other?
A: It’s all or nothing. Sometimes we’ll go a month without seeing each other, and then sometimes we’ll go a month where we spend 24 hours a day together. The part that is hard is to find time together that doesn’t have anything to do with music. Taking date nights. Those are hard to come by. We have to put those on our schedules and make time to do it.

Q: We thank you for your service to our country. What influenced your choice to join the Air Force?
A: It was a very spontaneous decision; probably the most spontaneous thing I’ve ever done. I was driving home from a frustrating trip to Nashville when I was 18 years old and saw a recruiter’s office and decided to go in. I signed up on the spot. And I’ve never regretted that decision for a second. It was an incredible 6 years that changed my life. I saw the world, met people from all sorts of different places and cultures, and got to see things from a much bigger perspective. It was a defining part of who I am today.

Q: Beer or whiskey?
A: Whiskey! That’s an easy one. I used to be a beer guy but beer and singing don’t go together very well. At least not for me. I have had a love/hate relationship with whiskey but we’re getting along pretty well these days. We’ve found our balance.

Q: What foreign language are you fluent in, and why did you choose it? Do you use the language often?
A: Only Arabic. And I wouldn’t say fluent anymore. You have to use it to stay fluent and there aren’t many chances for me to use Arabic in this line of work. But now my daughter is studying it in college so I’ve been brushing up to try and keep up with her. The Air Force chose it for me but I’m glad they did. It’s not something I would have ever done on my own. Something completely different.

Q: If they made your life into a movie, who would you want to play you?
A: Well, I get the Matt Damon comparison about once a week. I even got followed down Hollywood Boulevard one time by some people who thought I was him. So I guess that would be the choice. He’s a great actor too, so that helps.

Q: What is your favorite venue at MusicFest?
A: I really love the Steamboat Base Club shows. I’ve done a show there for the last three years and we are doing another one this year. It’s such a cool intimate room with the fireplace and the seating. I’ve had some really unbelievable moments in that room.

Q: What was the last picture you took on your phone?
A: A picture of a fortune cookie that I got that said that a change of career could be coming soon. I sure hope that one was wrong.

Q: If you could sing a duet with anyone, dead or alive, who would it be and why?
A: Merle Haggard. I know that’s an obvious answer but it’s still true. I learned so much about music by listening to him all these years, from writing to songwriting to how to make records to what a band should sound like. He’s by far my biggest influence, and he did some great duets!

Q: What are you most looking forward to with your full band presentation of Willie Nelson songs at MusicFest?
A: We are going to be playing the entire Phases & Stages album from front to back. That is my favorite record of all time. It’s a concept album about the story of a breakup. Side A goes through the phases of the breakup from the woman’s point of view and side B is the same process from the man’s point of view. It’s a genius record and always the standard that I try to keep in mind every time I go into the studio. I’m really excited about getting to do this!

Q: What musicians have you had the opportunity to learn from?
A: I try to learn something from everyone I’m around. I’ve learned from heroes and I’ve also learned a ton from people that I started out with. There is so much good music out there. There’s always something to take away from anybody you get to meet. But I would have to say specifically I have learned from Kevin Welch. Kevin was a songwriting hero of mine when I was growing and now he’s my producer. We’re about to make our 5th album together and I’ve learned more from him every time. I sure owe him a lot.

Q: What is your spirit animal and why?
A: Does a dog count?? Big dogs though; I’m not a fan of small dogs. I love everything about dogs. They are domesticated but could survive in the wild if they have to. They can be comforting and still be protective when it’s time to. They seem to have a good handle on the balance of things.

Q: When you get the chance to take a break from touring, what do you choose to do?
A: Sleep!! There’s always a lot of catching up to do after the touring is done. I really do try to just take a break and decompress for a little bit. Then I’ve picked up a few hobbies lately like photography and woodworking. It used to be that traveling and music were my hobby, but now that’s my life. I feel very lucky every day that I wake up and get to do this for a living.

Q: What advice would you give someone coming to MusicFest for the first time?
A: Go see someone you aren’t familiar with. One of my favorite things about MusicFest is getting to discover new music and artists. Go see your favorites but also take some chances. That’s one of the best parts of the festival. And reserve your spot for next year. I hear that’s a big one.