Breaking the Ice with Mike & The Moonpies 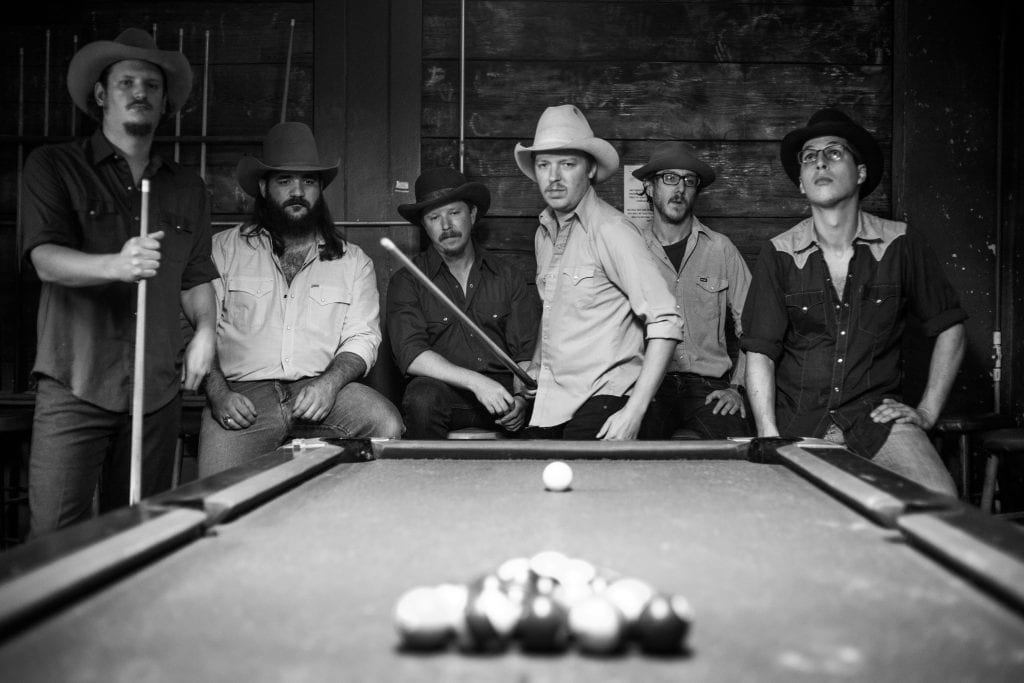 Q: Who are you and where are you from?
A: My name is Mike Harmeier, originally from Tomball, Texas, but now living in Austin. I front the band Mike and the Moonpies.

Q: We hear you have a new record, Steak Night at the Prairie Rose, coming out February 2, 2018. What sets this album apart from previous albums?
A: This record is a big leap for us. It’s the first record that I brought in a producer, Adam Odor, to take the helm. The record was recorded live over five days at Yellow Dog Studios in Wimberley, Texas. This is the first time we’ve made a record all in one session, and I didn’t play any of the songs for the band until we got in the studio. It allowed us to create every part on the fly and let the band have as much input and freedom as they wanted. It truly showcases the band.

Q: Where did you coin the album title, Steak Night at the Prairie Rose?
A: The title comes from my very first gig. My dad got me a Wednesday night residency at a bar called the Prairie Rose in Pinehurst, Texas when I was about 14 years old.  Wednesday was steak night and I would play acoustic from 7-10pm. After telling my wife the story, she said it would make a great song title so I ended up making a whole album based on the concept.

Q: “Country Music’s Dead” is a new track recorded with John Baumann about “real country records” still being created. What was the best part about creating this new single?
A: I really loved collaborating with John and Adam Odor for this single. I always wanted to do a Waylon and Willie thing, and when I brought the song idea to Adam, we just ran with it. We recorded it about two months after we had finished Steak Night and wrote, recorded, and released it all within about a month. It came really easy and I think it’s a great set up to our upcoming album.

Q: What is essential to a real country band?
A: It starts with the songs for me. If I have songs I’m happy with and the band enjoys playing them, then it’s “real.” I think just not trying to be something you aren’t and playing to your strengths makes you a real band, no matter the genre. Put that together with a lot of hard work and touring and you just might be able to do this for a living.

Q: Name one artist of any genre besides country that you are a huge fan of and why?
A: I’m a fan of all types of music. I grew up with country but got into blues when I started playing guitar. I’ve been in rock bands, punk bands, soul bands, and I listen to play pretty much everything. I’m a huge Wilco fan because I love how they approach making records. Same with Radiohead. I’m also a huge Ryan Adams fan for many reasons. Lately, I’ve been really into War On Drugs.

Q: Tell us about how the band came together.
A: I started the band in 2007; I had a home studio in Austin and would pick musicians out of bands that came by my place to record to play on some of my stuff. I’ve been in bands with my drummer Kyle, since high school. The rest of the guys I met in Austin and all from playing shows with other bands they were in.

Q: Is it true that you travel around with a painting of Garth Brooks?
A: Our bass player Preston bought this fan art painting of Garth for me one day in a resale shop. I was gonna take it home but it found its home in the van pretty quickly. It rides in the driver’s side rear window facing out so if you pass us you’ll probably see him.

Q: What is your favorite part about live shows?
A: I love the spontaneity of live shows. We make set lists occasionally but I hardly ever stick to it. I like reading a crowd and trying to keep them interested the whole show.

Q: Will you be sponsored by moon pies anytime soon?
A: They contacted us a few years ago and wanted us to add a tagline to our CDs and stuff that said, “Inspired by another American classic, the Moon Pie.” I agreed but never heard from them again. As long as I don’t get a cease and desist, I’m cool.

Q: Fill in the blank:
A: It’s not a party until… they tell me to turn down.

Q: What is your favorite MusicFest venue?
A: I love the Grand Ballroom but I’m excited to play the outdoor stage for the first time this year.