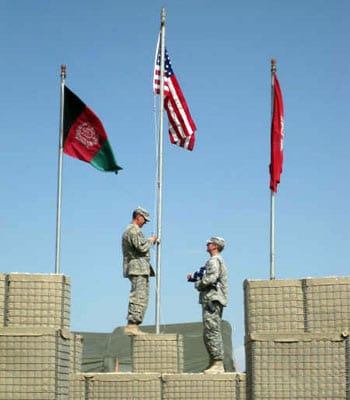 In 2009, first lieutenant Jason Woody of the US Army wrote to Dickson Productions expressing his regret that he would not be able to attend the upcoming MusicFest at Steamboat. He would instead, be spending that time in Afghanistan protecting our rights and freedom. In his place, he sent Dickson Productions the American flag that proudly flew over his army base. This flag now hangs at MusicFest each year above the stage in the Big Tent, as a reminder of those who fight every day for our freedom to enjoy such events with our friends and family.

We want to salute the troops this year at MusicFest 2015, and need your help! Share photos or video of the American hero that you’d like us to honor by posting to our Facebook page, or tagging your photos #MusicFestSalutes on Twitter or Instagram. During MusicFest 2015, we will display videos and photos in the Big Tent so that the entire MusicFest community can come together to honor these amazing men and women.

“The many different events that Dickson Productions arranges are perfect examples of what America is all about, and I would gladly fight for the rest of my days to ensure such freedoms are always available. We are living in a dangerous and ever-changing world. With conflicts abroad and a dismal world economy, celebrating what we do have with our friends and family becomes even more important.”