Texas in the Rockies

Anyone who’s ever been involved with MusicFest, from the festival-goers and musicians to everyone in between, knows that January is always cause for celebration. Not because it’s still basking in the afterglow of the holiday season, or a time for fresh starts, but because the first week of the month means six days of foot stomping, snow skiing, and rousing good times in Steamboat Springs, Colorado.

And this January, which marks the 35th anniversary of the festival, promises to be extra special.

What started out in 1986 as a college kid’s seeming flight of fancy has snowballed into a Texas music extravaganza, attracting thousands worldwide and selling out every year. I can’t imagine that MusicFest’s founder, John Dickson, quite knew what would become of that first group ski trip he organized, but he always knew music had to be part of it.

“I saw an ad in my college newspaper saying that anyone who could sign up 15 people would earn a free ski trip. I was poor and motivated,” Dickson laughs. “I needed to sign up 15, but I ended up getting 600. I had so many free tickets,” he says, “that I offered some to a few musician buddies of mine. If they’d provide the entertainment, I’d provide the trip.”

There  was  only  one  band  then  (“the  Housefly’s,” Dickson says), and one band does not a music festival make; but fast forward to 2020, and something like 60 bands will be playing about 300 hours of music across more than a dozen stages and venues to a crowd of nearly 6,000.

There’s no one secret to MusicFest’s success, but Dickson believes four key elements have played a part. First, location: Steamboat Springs offers the best facilities and amenities for skiing and snowboarding; it’s a town that thrives on hospitality; and it’s got a rich ranching history and ethos that melds well with MusicFest fans, organizers and artists. “There’s just something about the people of Steamboat,” Dickson says. “They’re authentic, they’re genuine, and it’s very fitting with the MusicFest community.”

“What better combo is there than seemingly endless live music, great people, world class skiing and unforgettable mountain views from the bottom up and top down?”

It’s also beautiful and one helluva fun place.  “The ski resort has everything anyone could want, from great food and drinks to shopping and other activities,” Dickson says. “But there’s even more to do beyond that. Some of the top activities around town include snowmobiling, dog sledding, horseback riding and hot air ballooning. “Our community is a fun group — they’re adventurous,” Dickson adds.  “Steamboat has a lot to offer in that regard.”

Which leads us to the next element: the festival’s vibe attracts its tribe. Steamboat locals call MusicFest “Texas Week,” and it’s true a significant number of artists and visitors hail from the Lone Star State. But every year includes like-minded people from all 50 states and beyond. Susan Horn, owner of Travel Associates, has been the contracting agent for MusicFest from the beginning. “I’m fortunate to have attended every single MusicFest since its inception,” she says. “If people go to the festival once, they tend to return time and time again. It becomes a can’t-miss event for them. The music is universal. I mean, we’re from Wisconsin … I’ve booked visitors from across the United States and even other countries.”

Dickson concurs. “The MusicFest community is something special,” he notes. “It’s hard to put my finger on it, but the participants, they just really love being there. They’re always happy and ready to have fun. In fact, many times there’ve been people who’ve met each other for the first time at the festival and then return as a group every year.” Dickson says it’s the same for the musicians as well. “It’s their vacation, too, and they’re fans of and friends with the other artists who are playing. They’re just as excited about a week of great music and skiing as the guests are.” 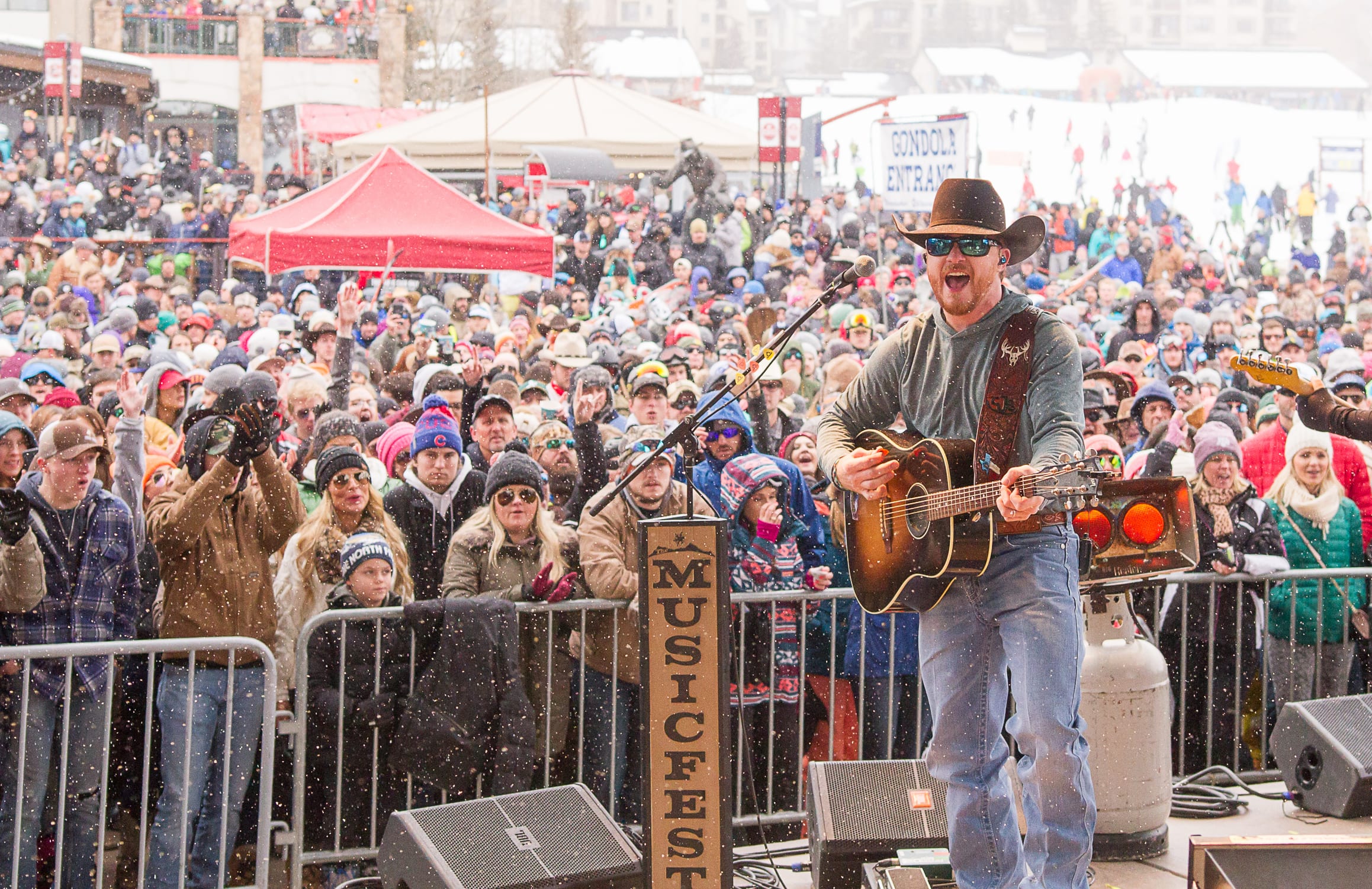 Keith Ogdee is one MusicFest attendee who keeps coming back. “What better combo is there than seemingly endless live music, great people, world class skiing and unforgettable mountain views from the bottom up and top down?” he says.

Ogdee’s first festival was in 2003, and with one exception, he’s returned ever since. “I’ve since made the trip with a large group of friends each year, and although our lives have changed— with marriages, careers, children — that week in January continues to take precedence as a can’t-miss vacation.”

One would think it’d be hard to manage such high expectations year after year, but perhaps that’s the next secret to MusicFest’s success: Dickson and his staff never stop looking for ways to keep it fresh. “John doesn’t rest on his laurels,” Susan Horn says. “I’m constantly amazed at the improvements made year after year. [They] work tirelessly to throw a fantastic, ever-evolving party every January for thousands of fortunate music lovers … it’s never been stagnant.”

To that end, Dickson says, “Look, we realize people are taking time off from work — they’re doing what they can to be here. So we want to exceed their expectations. It’s why we book the best, established musical talent and introduce the best up-and-comers. It’s why we keep adding different types of stages and venues. It’s why, even though we’ve sold out every year for 19 years, we limit the crowd size. We want to keep it enjoyable, intimate, different than anything else. And we want to keep providing the customer service our community deserves.”

For spectators like Ogdee, the more things change, the more they stay the same. “The only thing that’s really changed for me is longer recovery times!” he says. “First chair and early mornings on the mountain have become a thing of the past, but the late-night jam sessions, impromptu piano shows in the Grand lobby, card games and midday hot tub conversations are still as good as ever.”

And it’s worth noting, Ogdee says, that not all ski trips and music festivals are created equal. He remembers the time he and his friends decided to “stray and test the waters” with one of the other group ski trips advertised at the time. “That was a big mistake,” he allows. “It became very clear from that point on what a special experience MusicFest was and continues to be.”

So what is it that makes MusicFest so different? “Getting to experience so many great shows in such a short amount of time,” Ogdee says, “along with world-class skiing and accommodations…and seeing how much the artists enjoy themselves, being in the same place together and having fun instead of ‘working.’”

So, of course, the final key to success for a music festival lies with the music. And the artists tend to be just as enthusiastic about MusicFest as the guests are. The Randy Rogers Band once called it one of the greatest weeks in music in any genre. Wade Bowen says it’s “the greatest thing [he]gets to be involved in every year,” and Willy Braun of Reckless Kelly called MusicFest his favorite week of the year.

Roger Creager is the longest running performer, having participated in the festival for more than 20 years. The artists keep coming back, and so do their fans. “I remember the first time Roger [Creager] played for us in the mid-’90s … He was locally known in College Station, so I suggested he play mostly covers for our larger audience and slip in some originals now and then. Well, he did just the opposite of that,” Dickson says with a chuckle, “and the audience loved it.”

Since then, MusicFest has added to its Texas country and Americana repertoire, while building a reputation for delivering the finest production, variety and quality of musical performances in any genre. 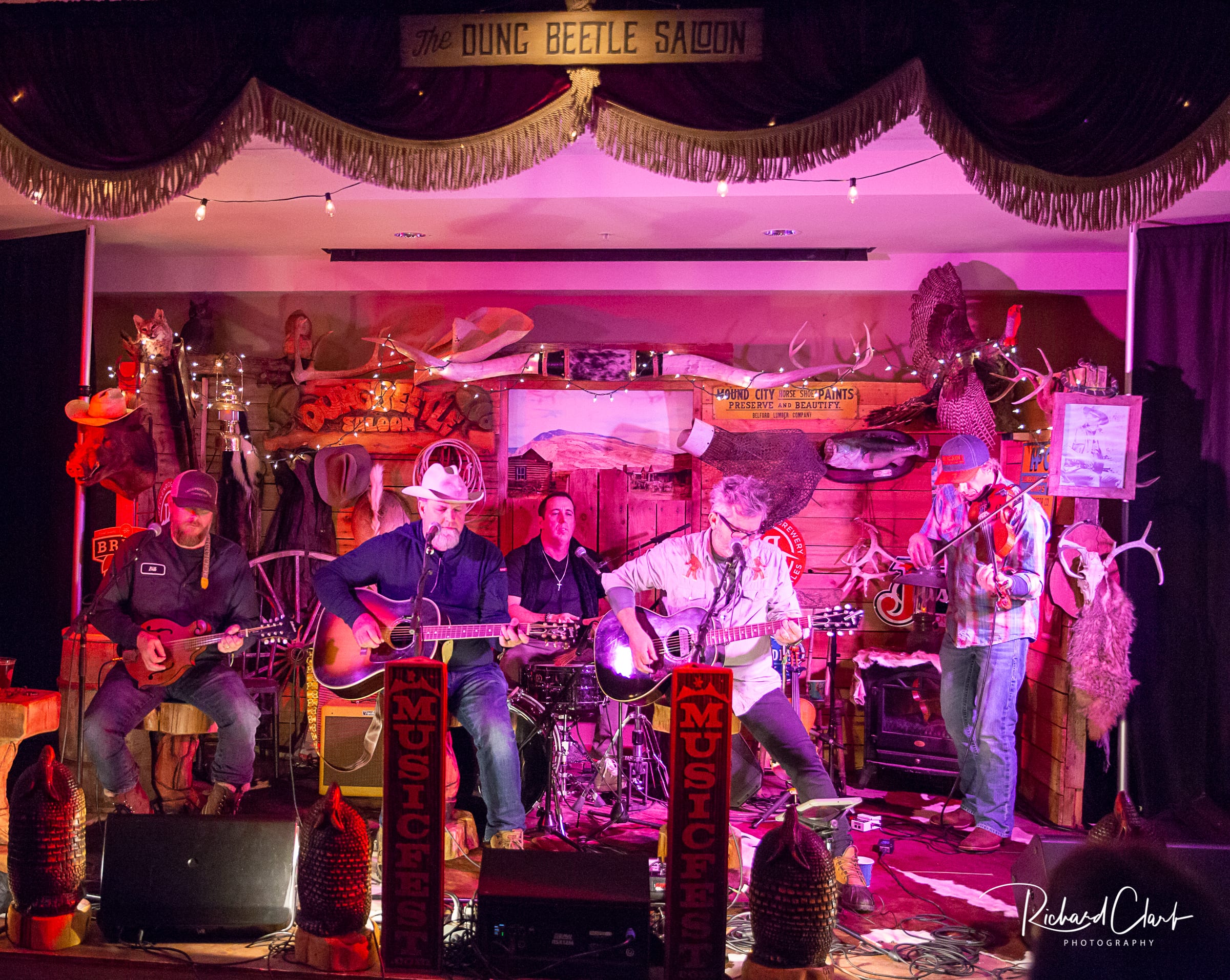 Dickson has also been keen on supporting new talent. Every year sees at least five debut artists in the lineup.

“It’s been really fun to watch some of these musicians launch and become Grammy or other award winners,” Horn says. “It’s also special to watch the yearly tribute to the legends. It’s amazing and wonderful to see younger musicians paying homage to their idols,” she continues. Dickson follows up, saying, “The Tribute to a Legend shows are fun for everybody, but it’s really our way of thanking the musicians who join us every year and make MusicFest the absolute one-of-a-kind, premier event it is. We love seeing those guys get to meet and perform in front of their idols.”

In celebration of MusicFest’s 35th anniversary, the highly anticipated tribute show for 2020 will honor Cody Canada and the music of Cross Canadian Ragweed. “Cody’s been entertaining our audiences going on 19 years now,” Dickson says, “so we’re doing something special and recording the live show to commemorate the event.” It will be downloadable and available on CD and vinyl.

Meanwhile, Horn will be marking the festival’s milestone with her daughter, Sarah. “She’s a Marine Corps officer who’s literally grown up alongside the festival and will be taking leave this year to attend. MusicFest week is, hands down, her favorite week of the year.”

As for Ogdee, when he’s asked how he’ll celebrate MusicFest’s 35th birthday, he says, “Every MusicFest is a celebration!” He wants nothing more than to do as he’s always done: get together with friends old and new, and “spend six non-stop days bouncing back and forth between concerts, skiing